Last week before I left the U.S. for the long journey across the Pacific to Bali, I stopped into a bookstore and picked up a copy of the magazine “Sedona Journal of Emergence” for the flight.    Thumbing through the pages, a small article near the back caught my attention.

It’s a compilation of stories from surprised, grateful and very happy readers who have been using the “most benevolent outcome” process to improve their lives.   The little tool comes from Tom T. Moore who investigates the phenomenon of angels.   He’s been using the process now for at least a couple of years and has seen it reduce stress and fear and make his life a lot easier.   And so have a lot of his readers.

Here’s a small example of how I used this tool the other day. 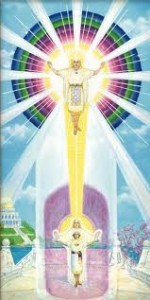 Back in Bali, I soon discovered, to my dismay but not my surprise,  that the internet in my office was no longer working (even though the wireless router was working fine in other parts of the house).   My knee jerk natural reaction was to immediately go into “fixing” mode and try to get it repaired right way.   But “most benevolent outcomes” was fresh in my mind.  I decided to give it a try.   I stopped what I was doing and asked out loud:

“I’m not sure why the internet is not working and I request a most benevolent outcome for repairing the internet. Thanks!”

With that simple phrase, I noticed that I felt better and less stressed about the situation.  A little while later I decided to leave the office and go into town to take care of some other business. The on my way home I happened to pass my favorite computer store and found myself stopping the motorbike at the front door. I explained the situation to one of the technicians who then offered to come to my house and see if he could fix it himself. He said he’d be there in about 45 minutes.

Now, if you’ve never been to Bali, you probably don’t know about the concept of “rubber time.” It basically means that 45 minutes could be an hour or maybe even two or three and quite possible never. Living here, you quickly learn to make sure you have other things to do when waiting for an appointment.

I was surprised when the tech pulled up in front of the house less than 45 minutes after we met in the store! We spent the next 1/2 hour together trying to get the net working. After eliminating everything else, he determined that it must be that the cable I had running to my office was bad. I agreed and he started packing his tool kit. As he was walking out to the door, I asked him how much I owed him and he said, “don’t worry about it.”

Heading back to the office, my first thought was to rush down to the computer store and buy 30 meters of outdoor cable this time (my office is detached from the house and the current cable runs through a jungle of plants). Instead I changed directions and went to the kitchen and had a drink. While I was drinking, I remembered that we had another long run of internet cable leftover from a previous company we had used. It was outdoor cable and since it wasn’t being used I decided to pull it off the house and possibly use it for the office.

I wrestled the cable off of the walls and out from under the roof tiles and about 20 minutes later I had it on the ground.   Stretching it toward the office I was sure I had my problem solved.   But the cable  came up too short.   Now,  I know myself and normally that would have upset me.    I was surprised when it didn’t.  I rolled the cable up and tossed it aside and then found myself observing the wireless router and looking for some other solution.   I noticed that it had an extra 10 meters of cable on it or so. I simply moved it closer to my office and see if the wireless would work. I did and “presto” I had internet again. The total cost to me was a little bit of sweat and labor and absolutely zero dollars.

A small example of a larger principle

I know that it’s a pretty  insignificant example, but restoring my internet and actually making it work better than before

for no cost certainly was a “most benevolent outcome.” I think what grabbed my attention the most was how I behaved so differently than I might have normally – which most likely would have involved buying new cable and spending a few irritated hours running it.

Since then I’ve been requesting “most benevolent outcomes” (or MBOs) for lots of things in my life.   Not everything is coming out exactly how I had envisioned it beforehand, but it does seem that things are really working out for the best.   And the practical details of life are getting easier.     For me, just like Tom T. Moore,  the tool is  reducing fear and stress and lightening things up a lot.   Thanks Tom and thanks all you guys out there working on this.

If this article resonates with you,  I hope that you give most benevolent outcomes or your version of it a try.   There may just be someone out there just waiting for the chance to help!

How To Request A Most Benevolent Outcome: Simply connect with your guardian angel, higher self or whatever your belief is. Then say “I request a most benevolent outcome for___________. Thank you!” The request could be something for yourself, for a friend, loved one or pet, or even for the earth in general.

4 replies on “Most Benevolent Outcomes”

Thanks for that, Mark! I’m doing it too…………. guardian angels ( our higher selves ) are amazing entities, aren’t they? Namaste from your friend Linda

Mark, I enjoyed your story about getting your internet working again. I would like to use the story in my weekly blog I have on my website http://www.TheGentleWayBook.com. I’ll mention your full name and book if you wish, although I normally only use first names for privacy. I also have a weekly newsletter with more advanced topics and 2 sample chapters of my first book to assist in getting started requesting MBO’s as I call them.
Tom

Loved the story Mark. I usually talk out loud when I need something and it always works for me. A few weeks ago it was a broken cistern that was pouring out of the overflow and would be for the next 48 hours until the plumbing company could arrive. I said out loud that I needed help and within 2 hours the landlord was going past the flat, noticed the flow of water from the overflow and rang my bell. When I told him the plumbing company couldn’t get here for at least 24 hours he sent his son to fix it instead! A most benevolent outcome 🙂

Also I loved the concept of “rubber time.” in the Caribbean it is the same only its known as “soon come” – tradesmen will say “soon come” and that might mean soon in 1 hour or in 10 weeks – who knows 🙂

[…] upon you.    One of the most helpful ways I’ve ever found to do this is to request “Most Benevolent Outcomes” for tiny details in daily life.   You can read more about that by clicking the link […]