I arrived in Singapore on Sunday, which happens to be market night in Little India.  Set within an sea of ultra modern buildings, super high-tech and non-stop advertising, Little India is one of the few places in the city which still has some character.   That’s even more true during the Sunday night market.  I took a walk through the busy, colorful streets full of people and fresh fruit and vegetables for sale.   In a gap between the crowds I spotted a sign for a vegetarian restaurant called Ananda Bhavan and decided to have a look.

Indian restaurants aren’t known for having a lot of raw food options, but I was able to find a few dishes that worked for me.   The food was average but what really struck me though was the calm and peaceful feeling inside the restaurant.    In my experience, that’s common to vegetarian places around the world.

As I was about to leave, I went downstairs to pay and I spotted this quote from M.K. Gandhi painted in white stylized letters on the dark green wall: 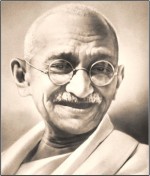 “An examination of the structure of the human body leads to the conclusion that man is intended by nature to live on a vegetable diet.  There is the closest affinity between the organs of the human body and those of fruit eating animals.  The monkey for example is so similar to man in shape and structure and it is a fruit eating animal.   Its teeth and stomach are just like the teeth and stomach of man, while those of carnivorous animals, as for instance the lion and tiger are entirely different.”


Alongside this quote is also painted Gandhi’s comparison of the physiology of meat eaters and vegetable eaters:

Based on these comparisons it’s quickly clear which group humans naturally belong to.   I’ve belonged to that group now for the past 15 years and I’m really glad I have.

As much as I’m inspired by this restaurant so proudly presenting Gandhi’s argument in favor of vegetarianism, I want to make one important addition that can help you save some time and get you healthier faster.

Interestingly, there’s not a significant difference in health between meat eaters and vegetable eaters in the wild.  Both tend to live healthy and disease free until the final 5% of their lives.   Also both of them eat all of their food raw.

To me it’s become so clear and makes so much sense.   I was a 75% cooked food vegetarian for 7

years before discovering raw foods.  During that time I ate tofu, beans,  lentils, whole grain breads, brown rice and all the other foods I thought were really healthy.   The problem with all of them is that they were so heavily cooked and devitalized.

I did feel that leaving meat out of my diet helped raise my awareness, kindness and compassion pretty much straight away, but I didn’t experience major physical health benefits like weight loss, clearer skin, improved digestion, less mucous, greater immunity and more until I became a 95% raw food vegetarian.

If I could turn the clock back in my own life, I would start with raw vegetarian instead of just vegetarian.    The difference is truly that big.

So, if Mr. Gandhi’s analysis and words resonate with you and you feel pulled to try a vegetarian diet, I’d encourage you to lok toward a raw vegetarian diet first.